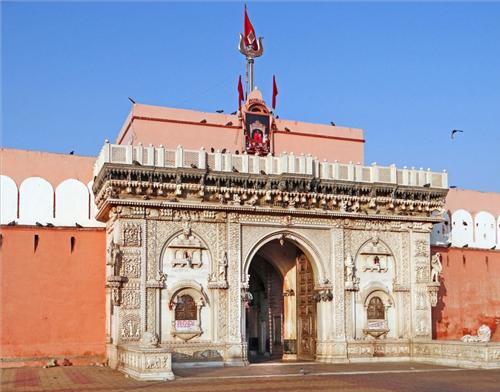 Bikaner, situated in the state of Rajasthan amidst the Thar Desert is a popular tourist destination for its gigantic forts, monuments, royal palaces, exquisite havelis and its mouth watering delicacies or snacks. This old city has stood testimony of the greatness warrior Rajput clan and fascinates tourists who visit it from across the world and in India as well. Bikaner is also famous for housing several temples built by Rajput princess and Karni Mata Temple is a huge crowd puller in this region for its holiness as well as something unique. The temple was commissioned by Late Maharaj Ganga Singh of Bikaner in 20th century.

Karni Mata Temple is located at a distance of 30 kilometers from Bikaner in Deshnoke, Rajasthan and is revered by devotees and tourists for seeking blessings from the deity, Karni Mata and to witness its 20,000 odd inhabitants; i.e. rats or rodents. These rats are popular in the temple premises and considered sacred, also known as Kabbas. The battalion of 20,000 black rats inhabiting in the temple is held in high esteem and respect so much that if a single rat is slaughtered, it has to be reinstated with a replica of rat crafted out of gold. Karni Mata is worshiped as a manifestation of goddess Durga and is the family deity of the royal clan of Bikaner and Jodhpur.

Several folklore and stories do the rounds about the connection between Karni Mata and the rats. Legend foretells that Karni Mata’s stepson Laxman got submerged in Kapil Sarovar while trying to quench his thirst. Karni Mata ordered Yama, the god of death to reincarnate her dead son and Yama eventually conceded thus bringing back all her sons including Laxman in the form of rats which are believed to inhabit the temple.

Legend also narrates a possibility of 20,000 warriors abandoning a battlefield and seeking refuge in Deshnoke thereby antagonizing and incurring the wrath of Karni Mata who condemned them to death. Later she relented and turned them into rats thus saving their lives in exchange of gratitude and their sworn service to her forever and granting them shelter in the temple.

The architecture of the temple is breathtaking with influence of Mughal style and the marble exterior at the entry point of the temple is a splendor, leading to the entrance or gateway adorned in silver ornamentation with several planks or strips displaying the different manifestation and legends regarding the goddess who resides in the main altar. 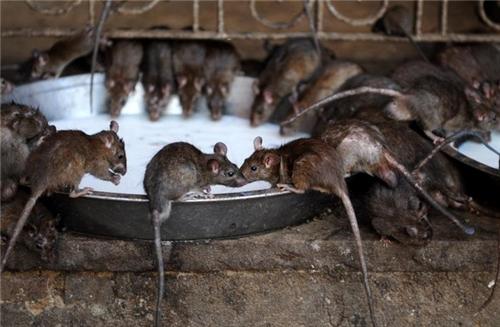 Source: Flickr
It is a holy site to witness a few white rats amidst an army of black rats on the temple premises as they are regarded as the most sacred and revelation of the goddess Karni Mata herself along with her 4 sons. Visitors and devotees throng the temple premises and offer food in anticipation of catching a glimpse of the white rats and seek blessings. The Prasad, food pecked on by rats are considered divine by devotees.

Fairs are held on the temple premises of Karni Mata twice a year during months of March, April, September and October to celebrate Navratri. The temple is open for devotees from 4:00 am till 9:00pm in summer and 5:00am till 9:00pm in winter when Aarti is offered along with bhog or Prasad to the deity. Devotees can make two types of offerings at the temple, namely Dwar Bhent and Kalaash Bhent. The temple was upgraded by owner of Karni Jewelers in the year 1999 whereby the silver gates and marble stone sculpting were donated from Hyderabad thus adding to the beauty of the temple. The temple can be reached via Bikaner through state transport buses, rail and private cabs.