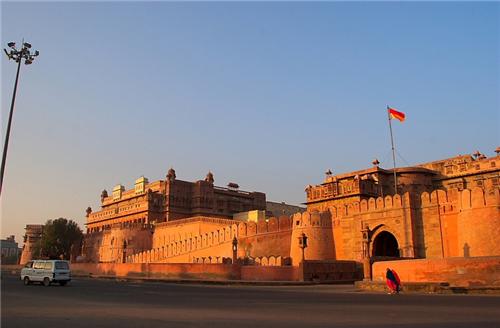 Junagarh Fort is a famous landmark and tourist destination in Bikaner. Originally named as Chintamani Fort, later it was renamed as the Junagarh Fort. It is one of the few forts in the state that has been built on the hilltop. The city of Bikaner was established surrounding the fort.

The complex of the fort was built under supervision of Karan Chand, the sixth ruler and Prime Minister of Raja Rai Singh, who ruled from 1571 to 1611 AD. The wall construction was linked with moat commenced in 1589 and the work was completed on 1594. It was built in the outer parts of the original fort of Bikaner at a distance of about 1.5kms from the center of the city. Some of the remains of the old temple have been preserved close to the Lakshmi Narayan temple.

According to the historical records even after repeated attacks by the enemies in an attempt to capture the fort, they failed to take it even for a day, except for single day occupancy by Kamran Mirza, the Mughal prince and son of Emperor Babur, attracted the fort in 1534 and was later defeated by Maharaja Rao Jait Singh, finally returning to Lahore.

Temples, Palaces and Pavilions within the Junagarh Fort

The large fort around 5.28 hectares is studded with pavilions, temples and palaces. These buildings offer a clear idea about the rich cultural heritage and are a manifestation of different architectural styles.

You can find different structures such as temples and palaces within the Junagarh fort in Bikaner. These structures are made of marble and sandstone. The palaces are known to be picturesque with windows, kiosks, courtyards. The temples, fort and the palaces are well preserved and throw light on the lifestyle of the Rajasthani Maharajas. The Junagarh fort is known as the “paradox between medieval military architecture and beautiful interior decoration”.

Gates of the Fort

Karan Pol or Parole is the main entry gate. The present gate is the Suraj Pol, where Suraj means Sun gate and pol also called prol is built in yellow standstone or gold. This gate is different from the other gates in the fort made of red sandstone.  This gate faces on the east that allows the sun rays to fall on it. There are two elephant statues made of red stone at the entrance. The gate was used as a spot for announcement of departure and arrival of the royalty by musicians playing trumpet from the gate gallery.

Other gates of the fort are Fateh Pol, Chand Pol, Daulat Pol and Karan Pol. These offer access to the fort from different directions. On the gatewall of Daulat Pol, you can see 41 handprints in red color.
Between the palace and the main gate, you can see a quadrangle and there is another gate known as the Tripolia gate. This gate is used before accessing the royal chambers. There is a small gate known as the Har Mandir, where the members of the royal family used to offer prayers. The quadrangle houses a big pavilion together with a pool developed in Carrara Italian marble. 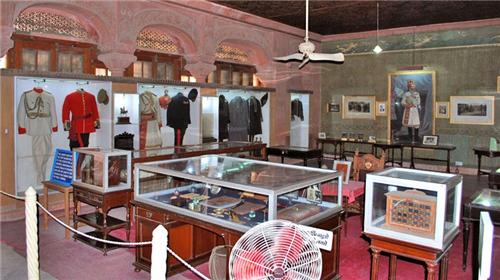 The fort Museum was the result of efforts by Maharaja Dr. Karni Singhji in 1961 under control of the "Maharaja Rai Singhji Trust". You can find Persian and Sanskrit manuscripts, royal costumes, jewels, miniature paintings, headgear, portrait galleries, enamelware, god’s idol, war drums, howdahs, silver and palanquins. You can find display of armory in the museum that consists of collection of the post-medieval arms.