Bikaner was founded by affluent businessperson prospered from the trade and merchandise, settling down in the city eventually. The meandering and constricted lanes and alleys in Bikaner still bear testimony to its earlier inhabitants who left behind their gigantic edifices and buildings with highly ornate window dressing in the bylanes of the city. These buildings are known as Havelis in Bikaner, crafted out of red sandstone with huge and ornamented courtyards. 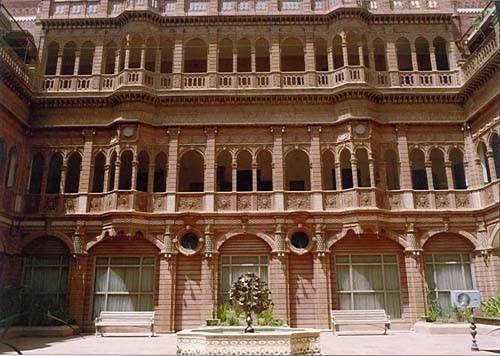 These buildings served as residential homes for the affluent business class who indulged in decorating them with a mix of Mughal and British architecture and shielding them from the arid and hot climate of the desert with beautiful jharokhas or casements and balconies, jaalis or punctured stone carvings or screens, chajjas or stone projections. With the number of Havelis amounting to 400, they are majestic sights to behold in the city of Bikaner and tourists from all over the world come down to witness them. These Havelis are all over 100 years old and the oldest is about 400 years old built between 17th and 20th centuries. 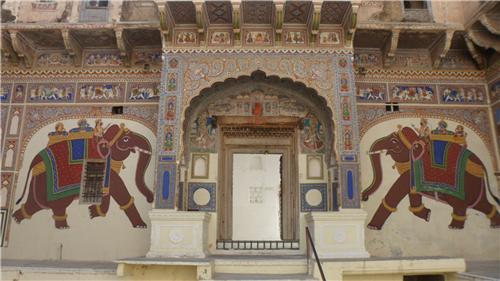 All the Havelis are constructed in the same manner, with grilled windows, crafted casements or jharokhas in the form of balconies, doorways and facades, cellars or gumahariyas and divankhanas combined together creating a mystic charm. Jharokhas measuring six feet by three feet are the chief attraction, with the Havelis measuring several storeys and they contain a Mahal or the interior decorated in gold sculptures. These Havelis used to hold mehfils or dance performances in their courtyards in the evenings and comprised of several rooms for its residents and guests.

Renowned Havelis in Bikaner includes Rikhji Bagri ki Haveli, Rampuria Group of Havelis, Haveli of Bhairondan Kothari, Haveli of Poonam Chand Kothari, Sampatlal Agarwal Haveli and Daga Chowk Havelis. Rampuria Group of Havelis is extremely famous for their architectural marvel created by Baluji Chalva in innumerable numbers and positioned in a row. Crafted from dulmera red sandstone, the artwork inside the Havelis is widely popular with extensive gold carving. Each Haveli being unique from the other, Rampuria Havelis had huge drawing rooms and Deewankhanas imparting an influence of Victorian, Mughal and Rajput architecture and intricate wood carvings. 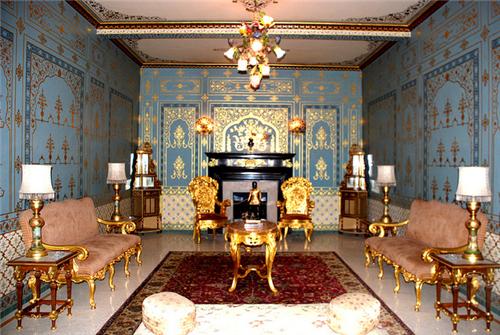 Daga Chowk Havelis in Dag Chowk area of Bikaner are also unique in their construction as they are spread out in the same area. With intricate and ornamented jharokhas and carvings in the form of flowers and the Havelis are enchanting for their divankhanas decorated with beautiful murals and Indian paintings with a western influence. The divankhanas in these Havelis are famous for storing intriguing artwork.

Rikhji Bagri Ki Haveli in Mohta Chowk in Bikaner is captivating for the intrinsic artwork and stone carvings with embossed flowers, sculptures and designs flanked by ornate jharokhas and curved gateways adds to its appeal. Similarly Haveli of Bhairondan Kothari is unique for its exquisite marble work attracting visitors to witness the captivating artwork.
It is unfortunate that lately, the Havelis are lying in ruins due to lack of maintenance and shortage of funds, while efforts should be made to convert them into heritage site and conserve their artwork and architecture. Some are being leveled to the ground making way for modern day construction or transformed into hotels thus dwindling in number and hence Bikaner is losing its old world charm as a tourist paradise in Rajasthan. Steps are being taken lately by organizations and trusts to preserve these ancient heritage sites.