Bikaner, situated at the heart of western Rajasthan is also called the "Tapo-Bhumi" of saints and the great saints since the pre-historic era. Drishadwati and Saraswati flows through this region. According to the archeologists, the Thar Desert is a part of the Bikaner city, was an ocean once. Several geographic changes took place over a period of time when the rivers dried up and the oceans started receding. The desert like nature of the state is reflected by the flora and fauna. Trees are generally short and have thin leaves, so that they have deep roots and do not lose water easily. 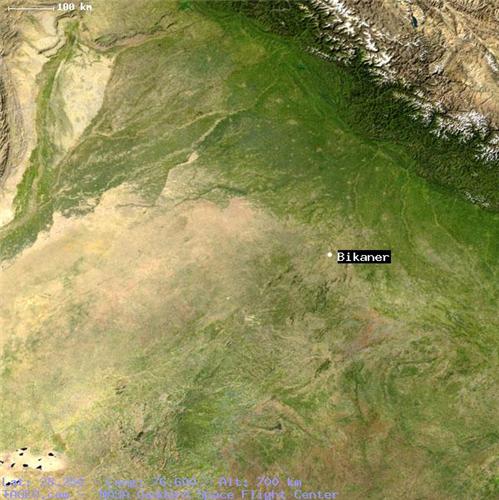 Thunder storms are frequent in times of May and June and are very frequent during the noon. Wind at times blow at a speed of 120 km/hr that may result in heavy disasters. You can expect around 18 stormy days in a year that is reducing these days because of canal irrigation.

Minerals and Mines in Bikaner

Irrigation and Agriculture in Bikaner

Before the canal irrigation, the agricultural activities relied on rainfall only. With advent of the Indira Gandhi canal the scenario started changing drastically. The mostly grown crops are mustard, groundnut, bazra, cotton, wheat and so on.

Bikaner boasts of amazing culture and history, which makes it a year round destination. The peak tourist seasons start from October and extend till the month of March. You can experience a cool and pleasant weather during this course of time.

The period from November to February constitute the winter season in the city. The pleasant weather and cool temperature is ideal for travelers to enjoy the places, forts and for sightseeing. Apart from the weather that attracts tourists, there is also the famous camel festival held during this time of the year.
The time from March to June constitutes the summer months when the maximum temperature reaches above 42 degree Celsius. However, if you visit the city during this time, you can get rid of the crowds around.

Between July and September, the city experiences monsoon. The atmosphere remains quite humid and the luxury hotels offer plenty of packages and weekend getaway offers.