Rajasthan is a vibrant state encircled by the Thar Desert and innumerable tourist spots spread across its cities. Sometimes tourists are in a fix as to decide on selected tourist spots to visit as there is no end to the list of sightseeing places. Bikaner is a popular tourist spot with palaces, havelis, forts, monuments, museums and of course temples or religious spots. The temples in Bikaner are a favourite with tourists in India and worldwide, especially Karni Mata Temple in Deshnoke, Laxminath Temple, Shiv Bari Temple, Bhandasar Jain Temple and the list continues.

Famous Temples in the Walled City of Bikaner

The temple of Karni Mata, a reincarnation of Goddess Durga is situated in Deshnoke village, 32 kilometers from Bikaner and is fascinating for the 20,000 odd inhabitants in the temple premises; i.e. Rats. These holy rats also known as Kabbas roam freely inside the temple and attracts scores of visitors from India and abroad to watch these holy rats who if run over a tourist’s feet are considered to be a blessing. Legend says these rats are reincarnated versions of Karni Mata’s sons who drowned in a pond and was revived by Lord Yama on the goddess’s insistence. If a rat is killed, it has to be replaced by a gold replica of the dead rodent. White rats which are rarely visible are considered a holy sight. 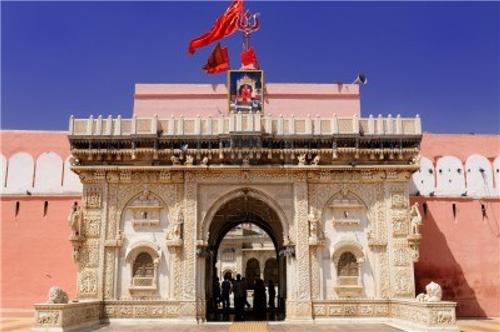 The marble entryway lined with beautifully carved silver doors is a sight to behold before entering the temple premises while the goddess sits in the sanctum. The temple is guarded by grilled wires and mesh to protect the rodents from birds and other predators. Prasad or holy food offered and nibbled by the rats is considered sacred by devotees who come to worship at the temple. The temple remains open from 4:00am in the morning till 10:00pm in the night.

Possibly the oldest temple in Bikaner, Laxminath Temple’s foundation coincides almost with the foundation of the city as in 1488 AD, the inception stone for the city was laid temple by Rao Bikaji, the Rajput warrior. A mausoleum with intricate architectural precision and beautiful artisanship, the Laxminath temple was commissioned by Rao Lunkaran between 1504 and 1526 and is a masterpiece. 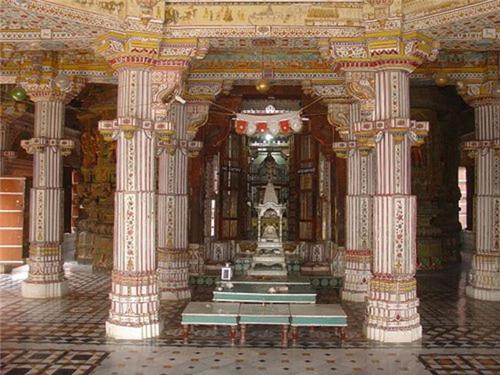 During the reign of Maharaja Ganga Singh of Bikaner, the temple received further facelift and upgradation. The temple is situated barely 4 kilometers away from Junagah Fort in Bikaner and the entry point adorned in silver carving is magnificent along with the idols of Lord Vishnu and Goddess Laxmi who reside inside the main sanctum. The temple is thronged by thousands of devotees throughout the year as well as during festivities like Ram Navami, Geeta Jayanti, Diwali, and Nirjala Ekadashi to seek blessings of the revered idols.

Bikaner is famous for the Bhandasar Jain Temple in Bhandreshwar area spanning two storeys dedicated to Shri Sumatinath (fifth Jain Tirthankara and founder of the Jain sect). Erected by the affluent businessman Bhandasa Oswal in 1468, the temple was completed after his death in the year 1514. The temple’s ornate architecture in red sandstone along with vibrant walls, floral designs, decorated ceilings and dancing figurines create a heavenly ambience. 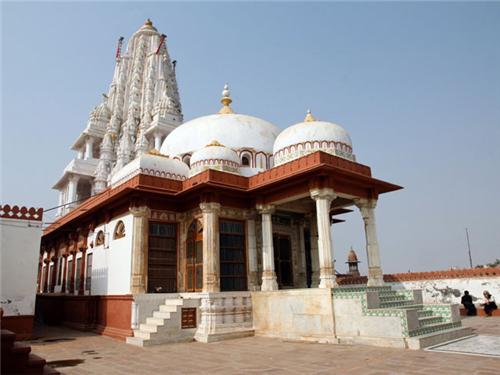 The interiors houses the idol of Sumatinath measuring 2 feet atop a pedestal seated on a silver throne surrounded by colorful portraits and ornamented gold leaf designs with marble pillars depicting floral trinkets. The storeys have small shrines housing the deities of 24 Jain Tirthankaras and the altar of Sumatinath is stunning covered in porcelain tiles. The second storey offers a spectacular view of Bikaner city and travelers visit this temple from faraway places to witness the splendid artwork and pay homage to the deity.

The temple is situated at a distance of 6 kilometers from Bikaner and visited by tourists and devotees who come to worship the deity of Lord Shiva. Shiv Bari Temple was commissioned by Maharaja Dungar Singh of Bikaner in 9th century to commemorate his father Shri Lal Singh’s death. The temple’s architecture is marvelous and the red sandstone imparts a heavenly look along with the 4 faced Shiva idol made from black marble housed in the sanctum.

The bronze figurine of Nandi bull on the walls facing the Shiva idol makes it a holy sight along with the temple’s fortified bastion. Throngs of devotees visit the temple on Mondays and during the month of Shravaan and Shivratri to pay homage to the idol and to worship him by pouring water atop the idol.

The temple is surrounded by 32 bathing ghats on the banks of Kolayat Lake (an artificial reservoir) and is situated on the Jaisalmer-Bikaner Highway, 51 kilometers from Bikaner. Constructed to worship Saint Kapil Muni Kolayatji, the temple looks resplendent in red sandstone and white marble. It is believed that Saint Kapil Muni achieved salvation or Moksha under a Banyan Tree at Kolayat and visitors consider taking a dip in the sacred lake will wash away their sins as the lake never dries up. A fair is held on the premises of the temple in the month of November during Karthik Purnima. The temple remains open from 6:00am in the morning till 7:00 pm in the evening.

Situated on the Bikaner-Jaisalmer Highway at a distance of 24 kilometers from Bikaner city, the temple is a unique creation constructed by Rao Bikaji who founded Bikaner. Upon his arrival from Jodhpur in Bikaner, Rao Bikaji founded the temple in contrary to laying the foundation stone of the city. The Kodamdeshwar temple is an exception as it does not have any doors or walls, but a deity of Lord Bhairon or Shiva atop a white marble pedestal.
The temple also houses two statues of Goddess Sati and comes alive during Bhadrapad when a fair is held on the temple premises. Kodamdeshwar temple remains open from 6:00 am in the morning till 7:00 pm in the evening.