Human beings always keep participating in contests and competitions. Ever wondered that camels might also compete and win the crown being voted the best dressed animal? Well, a trip to Bikaner in the month of January will be worthy to witness the amazing competition between camels in the famed Camel Festival. Wonder the ship of the desert walking in hordes dressed and decked up in bright costumes and ornaments dangling from their hump and neck vying for the first position inside Junagah Fort premises. The Camel Festival hosted by the Department of Tourism, Art and Culture, Rajasthan Government is a sight to behold with folk dance, handicrafts fair, puppet shows and the entertainment is endless. 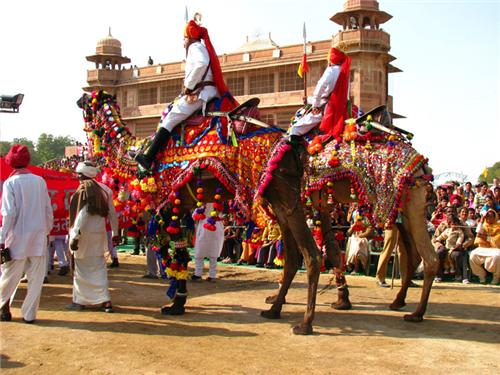 The beautiful creatures with humped necks that ferry cargos and tourists across the desert throughout the year get to display their assets once a year in January during Camel Festival held in Bikaner. With trinkets and jewellery dangling from their necks, vibrant robes made from fabrics and artwork over their humps, twinkling anklets parading the streets make the animals the prime attraction. The competition offers prizes for camel milking, best fur cutting style, best camel hair cut and best camel dance. The camels impress the awestruck visitors with their graceful dance moves and acrobatic skills while fireworks brighten up the sky at night along with stunning performances by local dancers and puppet shows. Sweetmeats and tea made from camel milk and handcrafts on display at the fair ground mesmerizes the tourists who attend the event. 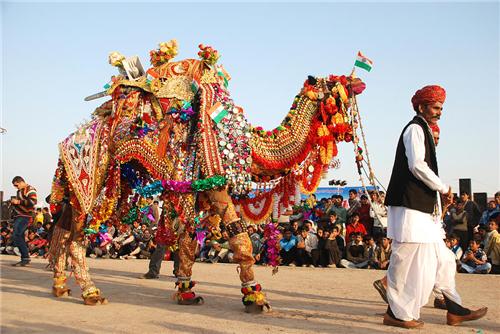 Moreover women dress up in vibrant ghagra cholis with embroidery and mirrors sewn in their dresses and men deck up in kamarbandhs and dhotis with turban over their heads. The Camel Festival is also popular for mustache competition and turban tying competition. The person with the longest mustache bags the prize while the person who can tie the headband (safa) or turban in seconds wins the first prize. The exciting part of this competition is Mr. Desert Pageant where the best looking individual with brains gets crowned. 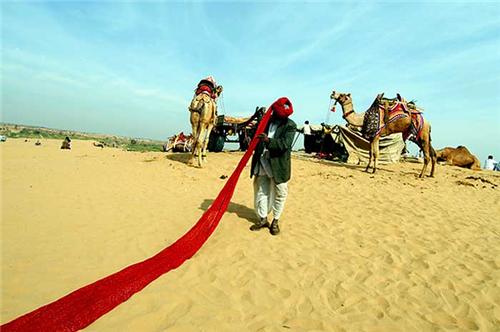 But nothing can beat the grace and elegance displayed by the camels with ornamented bridles and saddles racing across the streets and desert for grabbing the best prize with the crowds cheering in the background. This is a fascinating event to witness as Bikaner is famous for the camel breeding farm and also for being housing the Ganga Risala Corps, a camel unit which volunteered both in World War 1 and 2.

Bikaner is easily accessible by train from all major cities in India and the nearest airport is in Jodhpur, Rajasthan. The city can be toured in buses, private cabs or rented cars.