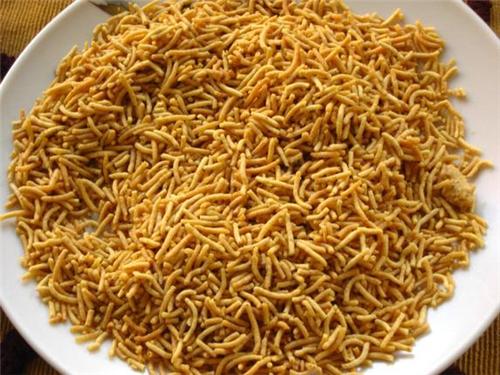 Bikaner brings to light everything that you can expect from the desert land, from the dust swirled vibrancy, to the narrow lanes, grand forts, red stone houses and the rich cultural histories lingering in the city. The undulating and constantly shifting sand dunes offer a perfect backdrop to an easy going and laidback place that is known for its beauty. You can explore the lavish lifestyle of the British Raj, swashbuckling maharajas along with the alternate realities of dreadlocked devotees and the medicine men. It is popularly said that the half of the population is occupied in making bhujia, while the rest of the population is busy eating it. That is precisely the reason why Bikaneri Bhujia is called the calling card of the city. Bikaner has plenty of dishes to offer apart from the delicious Bikaneri Bhujia. The crunchy and addictive snack has gained gastronomic fame in every corner and narrow lanes of the city.

It was in 1877 that Bikaneri Bhujia was first produced, when Maharaja Shri Dungar Singh was the king of this princely state. The now famous Bikaneri Bhujia in 2010 was given a Geographical Indication tag. This was done to make sure that unauthorized use can be limited. If you are a foodie, you must make a point to visit the city that is a pilgrimage spot as well as easy on stomach.

Popularity of the Snack

When you walk along the narrow winding lanes of the Bhujia Bazar, you can catch a glimpse of halwais in shops frying heaps of Bhujia. You can hop around the shops munching on the bhujias and also present them in attractive boxes to your loved ones. Sai Ram in Bikaner is a popular bhujia store where you can enjoy the real taste of the crunchy snack.

Bhujia is prepared in different parts of India, however; unlike the usual snacks, those made in Bikaner are not made of besan or gram flour. These are rather made of moth lentis, a sort of crop that is grown in the desert areas in Jodhpur and Bikaner. The bhujias get a unique crispy taste because of the desert air. This weather gives longer shelf life to the snacks and makes it easier to market them. So, if you are planning a trip to the city, make sure to taste the wonderful snack and carry some for your friends and family. You will be certainly appreciated for your choice of gift.

Explore more about Food in Bikaner