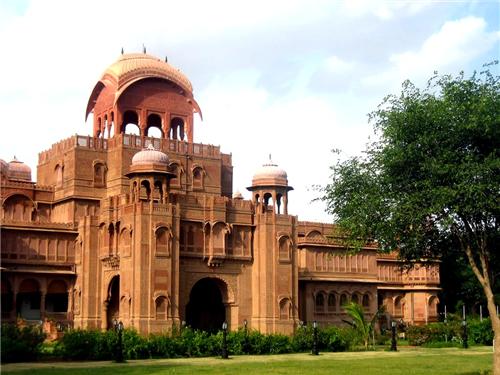 The Bikaner city lies in the northern part of the desert state. The place is characterized by numerous sand dunes. The city is best distinguished for riding camels and is known to have the biggest Camel Research and Breeding farms in the whole world. Maharaja Rao Bika, son of Maharaja Rao Jodha founded the city in 1486.

Geographically the city is located at an average altitude of 797 Feet and witnesses extremities of temperatures. The city lies in the western desert part of the state. Vegetation in the area reflects the scarcity of rainfall. You can find thorny bushes and cactus plants scattered all over the region. You can also find some seasonal dwarf plants, grasses and few shrubs here. The main agricultural crops include kharif and Rabi crops such as Bajra, mustard, wheat and pulses.

The weather remains quite hot during the summers, when the temperature ranges from 28 degree to 42 degree centigrade. The climate remains quite pleasant during the winters, when the temperature varies from 5 degree to 23 degree centigrade. During the monsoon seasons, the rainfall varied from 26 cm to 44 cm. The best time to visit the city is from October to February.

Culture and Art in Bikaner

The rich culture of Bikaner is reflected in the following:
Bikaneri Bhujia is highly famous all over the world. The city is also well known for the leather articles, handicraft works and is known to have the largest camel firm in Asia. Bikaner is also well known for the intricately designed Jharokas. These are red colored sandstone jails found on windows of havelis, temples and Junagarh fort. Bikaner is the center for Usta Art that reflects the rich cultural heritage of the city. This is a generic term used by the family members of Usta in Bikaner, who produce miniature paintings from opaque and translucent vegetables and mineral water colors.

Fairs and Festivals in Bikaner

The city celebrates a number of fair and festivals all round the year. The International Camel Festival is held at a distance of 25 km from the city, in the month of January by the state government. Karni Mata Fair is celebrated in Deshnoke, Kodamdesar Mela is celebrated in the village of Kodamdesar and Punarasar Fair is held in the Punarasar village. The village has been named after lord Hanuman, who is well known as the God of health, power, knowledge and wealth. Devotees arrive with food and refreshments to celebrate the occasion. As Punarasar temple is located close to the highway, it is also known as the Puranasar highway.

Akkha Teej or Aksaye Tritya is celebrated on the foundation day of the city. People from different social spectrum enjoy together by flying "chanda" or kites.

Paryushan is celebrated by the Jain community. Temples are decorated lavishly and fasting and spiritual ceremonies are performed during this time.

Kartik Poornima is also celebrated by the Jain community. You can see huge processions of musical bands, Thirthankar and processions with paintings during this time.

PATA refers to the giant sized square wooden structure where people can sit and chat. This is generally designed with the idea to bring people together, so that they can discuss their daily issues.

The brilliance of Bikaner enchants you with the impressive monuments that reminds you of the unforgettable past as well as the rich cultural heritage of the city. Tourists have plenty of options to explore the splendor of the golden Bikaner founded by Maharaja Rao Bika.

Among the numerous tourist attractions, the most famous ones are the Lalgarh Palace, Gajner Palace, Junagarh Fort that enchants the visitors with majestic effect and their imposing facades. You will feel lost as you gaze through the intricately designed marble screens. You will be taken back to the time when you walk past the lavish royal quarters and the stone corridors, while touring around the attractions.

You cannot afford to miss the wonderful exhibitions in the Prachina Museum. You will love the calming and soothing effect of the Bhandasar Jain Temple that attracts thousands of tourists from different parts of the world. The camel breeding farm gives you a lazy and nonchalant attitude in course of your tour.

The archeological ruins at the Kalibangan and the scared temple of Karni Mata will surely constitute a major part of the unforgettable tour to Bikaner.

Shopping in this city is mainly about ethnic wears, handicrafts. Rather than the consumer friendly factory produced goods. Most of the products are made of camel hide. You can also shop for woolen antiques, different art objects, jewelry and clothing. Carpets in the city are very popular and most of them are woven locally. Junagarh Fort and Kote Gate are the most popular shopping destinations in the city.

Bikaner has a well connected network of transport that connects to the major cities and the states by road, rail or air.

Jodhpur is the nearest airport situated 235 kms away from the pink city. Bikaner is connected to Jaipur, Delhi and other major Indian cities through air.

Bikaner connects to the major cities such as Ahmadabad, Mumbai, Jodhpur, Delhi and Jaipur by rail.
The pink city of Bikaner has very well network of road that connects to major cities including Jaipur and Delhi.

It is generally said that visit to India is incomplete without visit to Bikaner. You can avail of the taxis round the clock that are cheap. However, you need to ensure you have negotiated well before hiring the taxi.